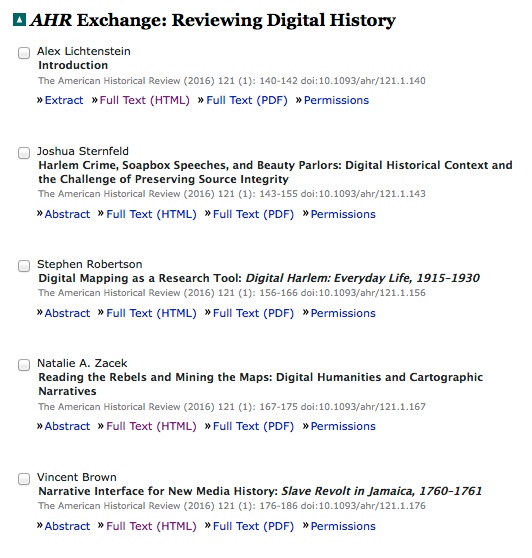 Reviewing Digital History: An Exchange on Digital Harlem in the American Historical Review

The February 2016 issue of the American Historical Review includes an extended review of Digital Harlem — “Harlem Crime, Soapbox Speeches, and Beauty Parlors: Digital Historical Context and the Challenge of Preserving Source Integrity,” by Joshua Sternfeld, and my response, “Digital Mapping as a Research Tool: Digital Harlem: Everyday Life, 1915–1930.“ This exchange appears alongside another, on Vincent Brown‘s Slave Revolt in Jamaica, 1760-1761, a very different kind of digital history mapping project than Digital Harlem, that works well as a companion piece to highlight a range of what is possible with web mapping tools. These are the first web site reviews that the American Historical Review (AHR) has published. By contrast, the journal’s neighbor in Bloomington, the Journal of American History (JAH), started reviewing websites almost 15 years ago, in June 2001. If the AHR has been slow to incorporate this form of historical scholarship — strikingly so given the prominence of digital history at the annual meetings of its parent organization, extending back a number of years — what it is now doing provides an important new format for the discussion of digital history. Instead of following the traditional book review format, as the JAH‘s web site reviews do, the AHR is soliciting a review of several thousand words, and pairing it with a response from the site’s creator. 1 This format puts creators and critics into conversations that flesh out the implications and impacts of doing digital history in a way that a short review cannot.

I’m particularly grateful for this new format as it offered me an opportunity to address how Sternfeld misapprehends and misrepresents Digital Harlem. Sternfeld first offered the substance of his critique at the DH2011 conference. When I stumbled on an online abstract of that paper, I emailed him seeking a copy. The idea of publishing an exchange about Digital Harlem came out of our email conversation, and we approached the AHR with a proposal to publish a series of short pieces early in 2013. The editors ultimately opted for a review and response rather than the format we proposed, and spent some time seeking other exchanges, before accepting our pieces in 2015. Sternfeld and I shared drafts, as I note in my response, but he held to a view of Digital Harlem that marginalized both its central concern with the visualization of sources and its design as a research tool that helped shape questions we explored in a set of articles and book chapters.2 Reviews that read scholarship in terms of what the reviewer would have done or what interests them, rather than what the work under review seeks to do are not limited to digital history. But if historians are familiar with monographs as a form of scholarship, they are less so with the different forms of digital history, their components and their goals. The AHR currently has no detailed guidelines akin to those that Jeff McCluken and his predecessors provide for JAH digital history reviewers to focus them on the particular characteristics of digital history.3 More so than those guidelines, however, it was William Thomas’s framework for categorizing digital scholarship that ultimately helped me articulate the differences between how Sternfeld framed Digital Harlem and what the site actually seeks to do.4

More broadly, the tension at work in our exchange – and I’d say also in the exchange about Slave Revolt in Jamaica — centers on the extent to which traditional, print scholarship and its conventions can be used as a measure in assessing digital history. An emphasis on assessing digital scholarship in terms of whether it offers an analysis or interpretation often manifests as recognizing only the forms that characterize print scholarship not the different forms that analysis and interpretation can take in digital media.5 This was the reaction which ultimately compromised the pathbreaking digital history article by William Thomas and Ed Ayers, “The Differences Slavery Made: A Close Analysis of Two Communities,” that the AHR published way back in 2003.  A similar issue arises when historians are confronted by dynamic visualizations such as Digital Harlem and Slave Revolt in Jamaica. As I wrote this, the OAH publication The American Historian released a great piece by Fred Gibbs, “New Forms of History: Critiquing Data and Its Representations,” that offers a guide to how historians should approach visualizations. My hope is that the exchange about Digital Harlem can similarly highlight how to assess digital history in terms of the properties and forms of digital platforms and tools.

Addendum: Cameron Blevins offers an interesting take on the new wave of digital history reviews on his blog, with a challenge to digital historians “to seize and shape the current wave of review.” He’s particularly concerned that reviews focus on the historical contributions of digital history projects – which he doesn’t see in the exchange on Digital Harlem. As I note in a comment on his post, I think that the exchange does in fact engage the historiography. At issue is the usefulness of the project’s expansive focus on everyday life rather than the historiography’s narrower concern with race leaders, community organizations, and the Harlem Renaissance.

5 thoughts on “Reviewing Digital History: An Exchange on Digital Harlem in the American Historical Review”