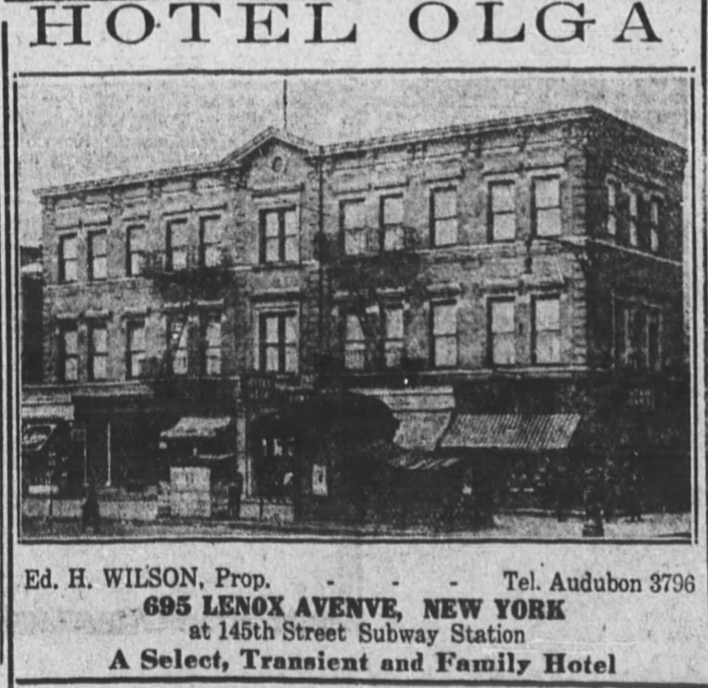 Summer did not just lead residents to depart Harlem for day trips and longer summer camps; it also brought visitors to the neighborhood. Some came as individuals to study or see family, friends and the city’s attractions, others as groups for large events. Tourists also appear in the newspapers’ social pages, as residents hosted parties in honor of out-of-town guests. Those held in July 1930 included a dinner party at a home on West 134th Street for Mr. and Mrs. Thomas Westheimer, visiting from Georgia, and a bridge party in a St Nicholas Avenue address in honor of four women from Los Angeles (10). Mapping a small sample of visitors from July 1925 and 1930 suggests that the bulk came from the midwest and northeast, with smaller numbers from the upper South and Florida. In 1930 they came from further afield than in 1925, notwithstanding the growing Depression, visiting from the West Indies and as far west as Texas and California.

Education also brought visitors to Harlem in the 1920s. As the NYA reported, “hundreds of teachers, college students and professional men and women [came] to New York to take summer school work at the universities and colleges.” Summer students filled the accommodation at the YMCA and YWCA, their registrations also reported in the New York Age and Amsterdam News, and became a hub of social activity, the occasion for parties large and small, and a visible presence at Harlem’s church services. July 1930, for example, saw a party at the Agnes Thorpe Art Salon, and a reception in the roof garden of the YWCA that drew 600 people (8). Summer students were a familiar enough feature of Harlem life to feature in its fiction: a story by noted black satirist and author George Schulyer called “Summer School Idyll: What Happens When a Pretty Southern Teacher Arrives in New York to Study?” was serialized in the Amsterdam News in 1935 (9).

In addition to the individuals who made Harlem a destination, summer was “convention season,” the New York Age noted in 1922, “the time for the holding of the annual conventions of the many race organizations…in the larger cities of both the east and West.” Fraternal orders, women’s clubs, university fraternities and sororities, medical and legal organizations, and church federations all gathered in conventions (1). So many delegates travelled to those events that Amsterdam News columnist Edgar Grey bemoaned the funds they contributed to the profits of white-owned railroad and steamship companies and spent on “trappings and other decorations” for no substantial benefits to the race. Those who defended the lodges noted that the “yearly spectacles” of the convention – and the opportunity to vacation that it offered – was a major reason why many members joined these organizations and supported the work they did for the black community (2).

New York (and Harlem) was “the ideal convention city with unmatched transit facilities, halls, and churches, wonder stores, beautiful parks,” as the New York Age noted in 1926, (3). For the Universal Negro Improvement Association (UNIA), headquartered in Harlem, a convention in the city was an annual affair for much of the 1920s. Events in 1920, 1921, 1922 and 1924 drew thousands of members from across the US and beyond its borders. Two competing UNIA conventions took place in 1926, after which the New York branch held its own, smaller annual conventions in 1927 and 1928. In 1929, Garvey moved the headquarters of the UNIA to Kingston, Jamaica, and held the convention there. Most other organizations did not have headquarters of the scale of the UNIA at which to regularly gather, and instead rotated the event among cities equipped to host a large gathering, of which New York City was one. Lodge members descended on Harlem in the 1920s: Prince Hall Masons and Odd Fellows in 1920, Knights of Pythias in 1921 and again in 1923, and more than 40,000 Elks, in 1927 (4).  (The other cities that hosted the Elks in 1920s were Boston, Newark, Chicago, Pittsburgh, Richmond, Cleveland, Atlantic City and Detroit (5)). Smaller church conventions also came to Harlem, with groups such as the National Baptist Convention and the Pentecostal Assemblies of the World bringing a few thousand visitors rather than the tens of thousands who attended the fraternal lodge gatherings (6).

The large conventions transformed life in the neighborhood. The appearance of Harlem’s major avenues changed, with the streets bedecked with flags, bunting, decorations, and electric lights. Organizations paraded along those streets; the Elks convention in 1927  involved the largest parade of the 1920s, featuring 25,000 men and women (in pouring rain). Visitors filled the pavements, and the hotels and dormitories, as well as many of the furnished rooms, with residents able to register to house delegates. Businesses and venues adjusted their practices to seek their custom. The Elks convention led the Savoy Ballroom to add extra events, and enhance its regular programs, and the Lafayette Theater to produce a special revue and add an additional midnight show on a Monday. In addition, organizers put on bus and boat rides around New York City, a steamer trip to Bear Mountain, a bathing beauty contest at the Manhattan Casino, a grand ball at the 369th Regiment armory (attended by 20,000 people), and a field day of athletic events at Commercial Field in Brooklyn. To cover all the activity, and run all the advertisements targeted at visiting Elks, the weekly Amsterdam News became a daily newspaper for the week of the convention (7).

In traveling between communities, members of political and social organizations, and religious denominations, students, and holiday-makers – together with sports teams and performers — tied black neighborhoods and communities together.  Visualizing these journeys presents black urban space as something more expansive terms than a neighborhood: as a network. Whites only until September 1, 1927: “The changing complexion of the neighborhood, which has become completely colored in the last three years, is given as the reason for the change….[A] complete colored staff is being employed, from the manager down” (NYA, August 27, 1927, 1).

Facilities: 54 apartments of 1-3 rooms with private bath in each room, over 7 floors