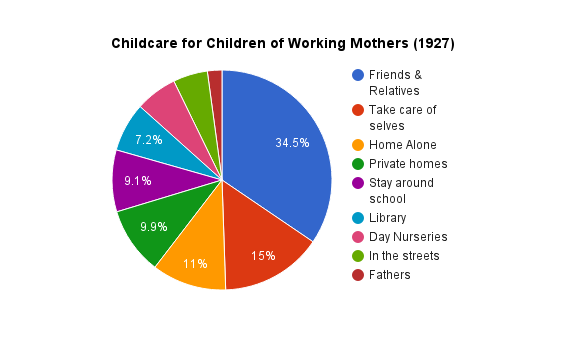 While most employed adults travelled outside Harlem to work six days a week, children remained in the neighborhood. An Urban League study of 2400 families published in 1927 found that more than half of the mothers were in paid employment. Those women reported a variety of means of providing care for the youngest of their children. Most commonly, they put them in the care of relatives or friends, or their father. A much smaller proportion relied on paid childcare, in private homes or less often in day nurseries.

White and African-American philanthropists established day nurseries to allow poor women with children to work. Harlem had only six day nurseries in the 1920s, run by community and church groups, providing places for approximately 200 children a day. Their locations were not well-distributed, so for most of the neighborhood’s mothers, even if they had been able to secure one of the limited places, getting their children to the nurseries would have involved impractical journeys.

Community leaders were well-aware that the need for child care was far greater than these provisions. They expected that black churches would address this need, and there is fragmentary evidence that some may have created additional nurseries. The Abyssinian Baptist Church did open a day nursery, but not until after 1930, when Adam Clayton Powell Jr succeeded his father as leader of the church.[vii]

Women operating nurseries in their homes could be found far more widely distributed through the neighborhood. Leaving children at a private nursery also did not require the rituals of benevolence involved in dealing with the elite women who ran day nurseries, or the agendas for remaking families and returning women to the home of the social workers who began to succeed them in the 1920s. The home-based nurseries varied widely in quality. It was certainly the case that no training was required and in that sense the barriers to entry were lower than the case with beauty work. If those advertising their services in the Amsterdam News identified a qualification, it was that of being a mother. A small number also advertised that they were licensed. New York was one of several large cities whose sanitary code required that day nurseries – defined as “a place where more than three children are received, kept and cared for during the day time” – have a permit issued by the Board of Health and be subject to periodic inspection. The permit required presenting a physician’s certificate attesting to the proprietor’s/nurse’s good health; the inspection examined the sanitation, morality and general appointment of the day nursery.[viii]

The need for a permit clearly did not operate as barrier to women operating nurseries in their homes: in 1927, Amsterdam News columnist Edgar Grey’s investigation of 123 nurseries advertising in local newspapers found only 19, less than 10%, had permits. Grey claimed to have found all the day nurseries he visited, even those with licenses, to be “filthy and unsanitary,” and he offered examples of proprietors passing illnesses on to the children in their charge, and nurseries being used as fronts for the illegal production of liquor and gambling.[ix] His polemic likely exaggerated the state of the homes he saw, but juxtaposing the locations of home nurseries and beauty parlors does indicate that they clustered in areas of tenement housing and prostitution arrests rather than the more upscale and respectable districts that had the greatest concentration of beauty parlors.

[vii] Adam Clayton Powell, Sr., Upon this Rock, New York: Abyssinian Baptist Church, 1949, 49, 54. Writing in Survey Graphic in 1925, George Haynes intimated the existence of more church run nurseries than I could find (Survey Graphic, editorial, 698). Edgar Grey saw “the future of this important work depends largely upon an increased interest in the problem taken by the church”(Amsterdam News, September 7, 1927, 15). Emanuel A.M.E. announced plans to establish a nursery in its basement at 37-41 West 119th St, but there are no reports that it actually opened (New York Age, 22 June 1929, 3).