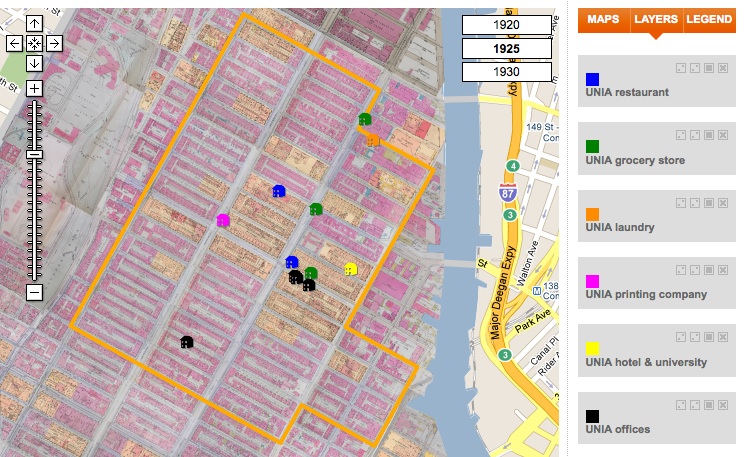 Marcus Garvey’s Universal Negro Improvement Association (UNIA) was headquartered in Harlem from 1918 to 1927.  The organization generally appears in accounts of Harlem on parade, on the occasion of its conventions.  However, the UNIA occupied more than the streets. Its headquarters was on West 135th Street, as were the offices of a number of the organizations it established.  Liberty Hall, the site of weekly meetings and the annual convention, was on West 138th Street, while a range of UNIA owned and operated businesses occupied buildings in the heart of Harlem.

Garvey purchased Liberty Hall in 1919.  The single level hall with low ceilings had previously been home to the Metropolitan Baptist Tabernacle. From 1922 the hall bordered the grand new home of the Abyssinian Baptist Church, meaning that the UNIA met adjacent to the largest African American church in New York City, one of the bastions of the Harlem establishment with which Garvey was frequently at odds. Although the UNIA’s home had a far less impressive exterior than the church, once festooned with flags and banners, and filled with up to 6000 people, including many in the uniforms of the UNIA’s soldiers, nurses and officials, the hall became the heart of Garvey’s vision for blacks in the US and around the world.

On Sunday evenings, Liberty Hall hosted the weekly meeting of the UNIA.  James Weldon Johnson, in a widely quoted account, offered a critical take on what occurred in the building, noting that “Meetings at Liberty Hall were conducted with an elaborate liturgy.  The moment for the entry of the Provisional President into the auditorium was solemn; a hushed and expectant silence on the throng, the African Legion and Black Nurses flanking the long aisle coming to attention, the band and audience joining in the hymn: “Long Live Our President:” and Garvey, surrounded by his guard of honor from the Legion, marching majestically through the double line and mounting the rostrum; it was impressive if for no other reason than the way in which it impressed the throng (Black Manhattan, 255).”

A typical Sunday evening meeting did resemble religious services, opening with prayers and the UNIA anthem, musical programs featuring the Liberty Choir and the Black Star Line Band, and a range of speakers, and included fundraising collections.  For a time, Liberty Hall also hosted religious services on Sunday mornings. The  UNIA almost lost the hall in early 1927, having been forced to mortgage it, until numbers king Casper Holstein stepped in.  However, he sold it at the end of the year, and by 1930 apartments occupied part of the site (shown on the map in Digital Harlem).

The UNIA headquarters, and the offices of the Black Star Line, was located first at 36 West 135th Street, in the Crescent Theater building, and from 1919, at 54-56 West 135th Street, next door to the Lincoln Theater, locations at the very heart of black Harlem. Although white journalist and NAACP officer Herbert Seligman described them as “dingy old dwelling houses…converted to new uses,” the offices clearly appeared as much more to black residents. When Captain Hugh Malzac visited, outside was “a line more than 100 yards long waiting to enter.  There were jobseekers and supplicants, stock-owners-to-be and a few hero worshippers who simply wanted to tell Mr Garvey how proud they were of him for what he was doing for the race.” “To walk into these offices,” white journalist and NAACP officer Herbert Seligman wrote in 1921, “was to enter a fantastic realm in which cash sales of shares and the imminence of destiny strangely commingle.” Garvey’s office was on the third floor.  By 1921, the UNIA needed extra office space, and expanded next door to 52 West 135th Street.  It retained offices there until January 1926, when the building was sold to pay back taxes; 54-56 West 135th Street was also sold in November 1926.

The UNIA established the African Communities’ League in 1918 and the Negro Factories Corporation in 1920 as the business side of the organization, to show that blacks could compete with whites and makes them self-reliant. In Harlem, the Corporation opened the Universal Steam Laundry, with 50 employees, and the Universal Tailoring and Dress Making Department, both at 62 West 142nd Street, producing UNIA uniforms and fashionable clothing, which was displayed in fashion shows at Liberty Hall. The Corporation also operated three grocery stores, two restaurants, one in Liberty Hall, and a printing plant. The printing plant gave the UNIA an address on Seventh Avenue, the most prestigious of Harlem’s avenues, which was on its way to becoming the black neighborhood’s main street, and a location that Garvey used to advantage as the site of a reviewing platform for the 1924 parade (see below). The other enterprises were located on the less prestigious Lenox Avenue and on 135th Street east of Lenox Avenue, with laundry in an industrial area. These enterprises employed over 200 people, but by the end of 1922, most had gone out of business.

At the 1922 UNIA convention, Garvey also announced the creation of the Phyllis Wheatley Hotel, to house delegates, and the Booker T. Washington University, at 3-13 West 136th Street . The university offered training in civil service, agriculture and commerce for UNIA officers. Exactly how long it operated is unclear.

The UNIA’s presence on the streets, however, survived even as its ownership of structures crumbled.  The grandest parades took place while Garvey was in the US, on the occasions of the conventions in 1920, 1921, 1922 and 1924 (Garvey, in prison awaiting bail having being charged with mail fraud and fearing divisions within the organization, canceled the 1923 convention and parade.).

On these occasions, uniformed members of the African Legion, Black Cross Nurses and dignitaries and placard bearing members paraded up and down Seventh and Lenox Avenues as far south as Central Park, putting on a spectacle for black residents and their neighbors in the blocks further south (for details, see the post on Parades; there is only sufficient evidence to map the routes of the 1920, 1922 and 1924 parades).

Even in Garvey’s absence, UNIA members continued to parade each August for the remainder of the 1920s, bearing portraits of their deported leader. Several thousand marched on each occasion, according to press reports, but they did not venture outside black Harlem, as in earlier years, to confront white New Yorkers.  The 1930 parade ventured the furthest south, to 120th Street, but by then that area was almost entirely populated by blacks.

The reduced reach and challenge of the parades paralleled the lost offices and businesses.  Although still a part of the neighborhood’s life, after 1924 the UNIA did not have the presence it had in the early years of the 1920s.

3 thoughts on “The Universal Negro Improvement Association (UNIA) in Harlem”