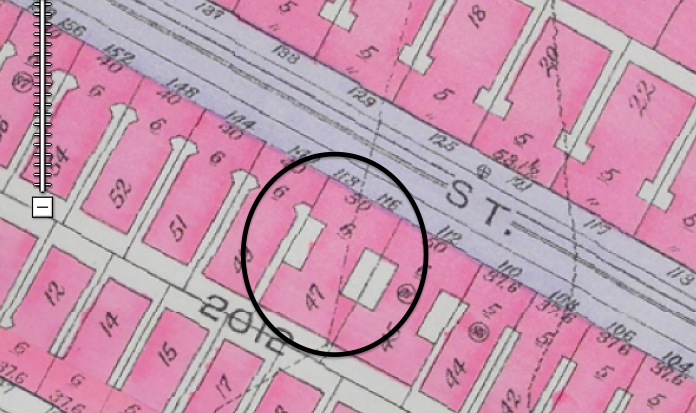 Aggregated census data have been important in establishing the character of Harlem as a black neighbourhood.  Census schedules individualize that data, and perhaps more importantly for Digital Harlem, locate individuals at an address, in a specific place. So while I use census schedules to identify and trace individuals, I just as often use them to populate places, as part of an approach that seeks to identify the variety of different places that made up the neighborhood and locate the events and individuals found in 1920s Harlem in the context of those places.

The building I’m going to use as an example in this post is 116 West 144thStreet. It is located in upper Harlem, right on the northern boundary of the black section in 1920.  A six-story apartment building, one of a pair, it still stands today. What drew this place to our attention was a fight that took place on West 144th Street, a few buildings east of number 116, in June 1928. A man visiting the friends exchanged words with a 17 year old boy he believed was behaving inappropriately toward a girl, provoking a confrontation with the boy’s father, who we have given the pseudonym Morgan Thompson, that led him to cut the visitor 5 times with a knife.  When police came to 144th Street that night to arrest Thompson, they found him asleep in his home, an apartment in 116 West 144th Street.

Thompson lived with his wife of seventeen years, Margaret, a domestic servant and their two children, the seventeen-year-old boy, George, and fifteen-year-old Elizabeth.  The family had resided in New York City since 1917, living the whole eleven years at 116 West 144th Street.  As late as 1910, the building and those surrounding it had been entirely occupied by whites.  By 1920, all the residents were black, and would remain so throughout the 1920s and 1930s, as the area occupied by blacks spread further north and west.  Just how many apartments there were in the building is unclear: the 1910 census recorded 29 households (as 118W144th), the 1920 census recorded 32, the 1925 State Census, 31 and the 1930 census only 25.

A number of the first black residents remained for extended periods of time, as the Thompsons did.  While they moved out in 1929, four households residing there in 1920 were still in the building in 1930, 12 more remained from 1920 to at least 1925, and another five resident in 1925 were still there in 1930.  The census does not tell us anything about the relationships of those residents, but their long-term presence represents at least the raw material for some sort of community.

Tracking comings and goings from the building offers another perspective on community.  Its not possible to trace where most residents in the building came from, as the 1920s saw so many arrivals from outside the city, but it is possible to use census schedule to trace where many of those who left went to — 1/2 those who I can identify moved within a 7 block radius, close enough not to require the complete rupturing of any ties they had established

Identifying the building as occupied by blacks captures only part of its character. It is a picture drawn from one of the census questions.  Moving across the census schedule to the question about birthplace reveals diversity obscured by the focus on race:  ¾ of the building’s residents were West Indians like the Thompsons, whereas West Indians represented only about 20% of the overall population of Harlem. So this building appears to have been one in which West Indians gathered. With one in every five residents hailing from the West Indies, there was ample scope for them to live much of their lives in the company of fellow immigrants. That did not mean they were isolated from the larger African American community, but it certainly helped them retain an identity that created sometimes tense relationships with their black neighbors. West Indians could be distinguished from native-born blacks by their accent and language, and distinctive styles of worship, cuisine, and sartorial display. Color prejudice against dark Caribbeans also divided the two groups, as did the increasing prominence of West Indians as business owners, which stirred economic competition.

Another feature obvious feature of 116 West 144th Street was the presence of lodgers. The building went from having lodgers in almost half of the thirty-two households in 1920, to in over 2/3 in the depression year of 1930. As the black population of Harlem expanded and spread, the area of black residences did not keep pace with the number of newcomers. Rising demand for housing produced skyrocketing rents, encouraging landlords to subdivide apartments, and forcing families into fewer rooms, and into sharing that limited space with lodgers. Higher proportions of black households contained lodgers than did whites living in New York City, with the blocks between Lenox and Seventh Avenues became among the most densely packed residential streets in all of New York City, as crowded as the better known tenements of the Lower East Side.  The abundance of lodgers led to large numbers of cafeterias, cheap restaurants, tearooms, cabaret and movie theatres to cater to them. 116 West 144th Street was well-situated in this regard, located within 2 blocks of the Odeon, Roosevelt and Douglas Theatres, and the Lincoln Recreation Center, with an auditorium and swimming pool, and with the Savoy Ballroom and the Renaissance Ballroom and Theatre two blocks further away, and restaurants and other businesses on Avenues and 145th Street.

116 West 144th Street shared many of these features with the 14 other buildings neighboring it on the block between Lenox and 7th Avenues. In total, 49 of the 322 households remained throughout the 1920s, just over 15% of the total, compared to 12.5% in #116 – although none did so at two addresses. West Indians resided in disproportionate numbers in those 14 buildings, with only 4 having less than double the proportion of West Indians in the population – but none had a larger proportion than number 116.  This block was evidently an area of Harlem in which West Indians gathered. The picture in regard to lodgers is more muddled. Number 116 had a slightly smaller proportion of households with lodgers in 1920 than the average for the street (44% vs 47.5%), and a significantly higher proportion in 1930 (69% vs 51%), with a wide variation among individual buildings in both years (27%-62% in 1920, 23%-81% in 1930).

The recently released 1940 census schedules reveal significant changes at 116 West 144th Street and the neighboring buildings. At #116, none of the households resident in 1920 or 1925 remained in 1940, and only 2 of those resident in 1930 remained in 1940, together with 6 households resident in 1935. As the Depression hit Harlem, many residents (including Morgan Thompson and Perry Brown) faced eviction and changed circumstances that dissolved the residential stability of the 1920s. The proportion of West Indian households at #116 dropped to only 42%, with the proportion including lodgers also dropping to 42%. The rest of the block had also changed significantly by 1940: across all 14 of the other buildings, only 9 households remained through the entire 1930s (3% compared to 15% in 1920-1930).  The West Indian population of the block dropped, from 46% of households to only 30%.  At odds with the change at #116, the proportion of households with lodgers increased, with only 3 of the 14 buildings having lodgers in less than 50% of households.

What I hope this example demonstrates is how census schedules individualize data about locations as well as their residents, allowing the focus to be narrowed from enumeration districts of several blocks to individual buildings.  As much as we think of the census as a source of information about individuals, it is also a picture of the places that made up the United States in the past.

This post is based on my presentation to “The 1940 Census as Digital Data,” a roundtable discussion organized by the Digital Innovation Lab at the University of North Carolina, Chapel Hill on April 10, 2012.