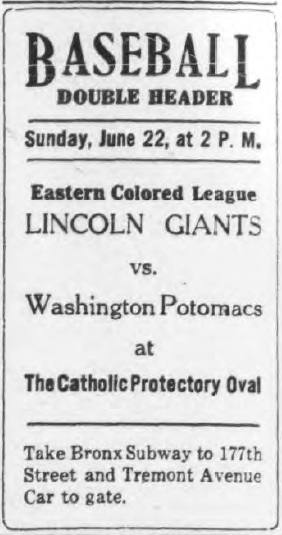 In 1911, Harlem gained its own black professional baseball team, the Lincoln Giants. The white brothers, Edward and Jess McMahon, established the team, obtaining a lease on Olympic Field, at 136th Street and 5th Avenue, where the team played home games on Sundays, the only day off for most black workers. Initially managed by Sol White, a well-known former player, the team included five of the best black players in the nation, recruited away from teams in Chicago and Philadelphia. This formidable combination propelled the Lincoln Giants to a dominant record in their first three years.  Many of those wins came against teams of whites, including teams, or all-star teams, from the segregated major leagues.  Those interracial contests drew the largest crowds, including significant numbers of whites; in fact, on several occasions, as many as 10,000 fans packed into Olympic Field, spilling onto the playing area. Whites also attended games between black teams, often making up as many as a third of the spectators. Despite the absence of segregated seating, there are no reports of friction in the mixed crowds; most of the conflict at games centered on the umpires, who were almost invariably white, even in games involving black teams.

In 1914, the McMahons’ financial difficulties forced them to sell the Lincoln Giants and the rights to Olympic Field to two other white men, James Keenan and Charles Harvey.  Many of the players, however, remained contracted to the McMahons, who for three years operated another team, the Lincoln Stars, based at the Lenox Oval, on 145th Street. When that team folded, the McMahons abandoned baseball, but not Harlem: in the 1920s they took control of the Commonwealth Casino, on East 135th Street, where they staged boxing, including interracial bouts, and, from 1922-24, operated a black professional basketball team, the Commonwealth Big  5.

While the Lincoln Giants had regained their position as Harlem’s team, they played in the neighborhood for only three more years. In 1919, developers transformed Olympic Field into a parking garage, forcing Keenan and Harvey to relocate home games to the Catholic Protectory Oval, at East Tremont Avenue and Unionport Road in the Bronx, taking with them the grandstand and bleachers from their former home.  Surrounded by the gothic structures of the orphanage, and shaded by trees, the field was beautiful but very small. To get there, fans from Harlem had to take a long journey by subway to 177th Street and and then take a street car. The Lincoln Giants would play there until 1930.

Other stadiums bordering Harlem also provided venues for baseball games involving black teams.  The Lincoln Giants played several games at American League Park, at Broadway and 167th Street, better known as Hilltop Park, the first home of the New York Yankees. For a season in 1920, the Bacharach Giants, an Atlantic City based team owned by Harlem nightclub owners John Conors and Barron Wilkins, played at Dyckman Oval, at 204th Street in Washington Heights, and at the major league stadium, Ebbets Field, in Brooklyn.  That year the New York Age relentlessly promoted the black-owned team as Harlem’s own, at the expense of the Lincoln Giants.  Despite fans’ apparently enthusiastic response, the Bacharachs returned to their home in Atlantic City after 1920. Dyckman Oval was also one of the homes of the Cuban Stars, the team of Cuban and Latin American players managed by numbers banker Alex Pompez.  However, Pompez lacked control of the venue (until 1935), so the team competed for dates with other white and black baseball teams, football games and boxing bouts, and had to also play ‘home games’ in the Bronx, Manhattan, and even in New Jersey.  Black teams also occasionally played at Ebbets Field, and at Yankee Stadium, the major league stadium close by Harlem in the Bronx.

If watching baseball in the 1920s meant leaving black dominated Harlem, the journey of crowds of several thousand to these stadiums, and their occupation of places otherwise associated with whites, was a quite different experience than leaving Harlem in small groups to go to work.  Crowds of fans claimed, albeit it temporarily, spaces within the city for blacks.  Reporting the start of the Bacharach Giants’ 1920 season, Ted Hooks, the sports editor of the New York Age, described a parade of automobiles following the team bus from Harlem to Dyckman Oval, with many returning for several loads, filling the streets around the stadium with vehicles driven by blacks. Black crowds likewise took ownership of the space of the stadiums.  Reporting the first the Lincoln Giants-Bacharach Giants game at Ebbets Field in July 1920, Hooks wrote, “Colored autos, colored sight-seeing cars, colored players, colored band, and, above all, colored umpires.  All the foregoing proved that they knew their business…” Inside the stadium, the press treated the games as social events as much as sporting contests: the Age gave several columns of its coverage to descriptions of the field, the team uniforms, the jazz band, the spectators and the noise they made, concluding, “The game proved the colored fans the equal in deportment of any race that has ever graced Ebbetts Field.”

In 1923, the Lincoln Giants joined the new Eastern Colored League, a black baseball league.  Crowds at the Protectory Oval hit record levels as in excess of 10,000 people regularly turned out for league games.  However, disputes among the team owners bedeviled the league, which eventually folded in 1929.  The Lincoln Giants played one more season, in 1930, dominating opponents in a way the team had not since its early years.  In July, they played in the first game between black teams at Yankee Stadium, a benefit for the Brotherhood of Sleeping Car Porters that drew a crowd of around 20,000.  After several more games at that iconic venue, the team finished the season there with a championship series against the season’s other dominant black team, the Homestead Grays.  The Lincoln Giants lost 6 games to 4, and staging the event brought considerable financial losses for the team’s owners.  Soon after, they also lost access to the Protectory Oval, and the team folded.