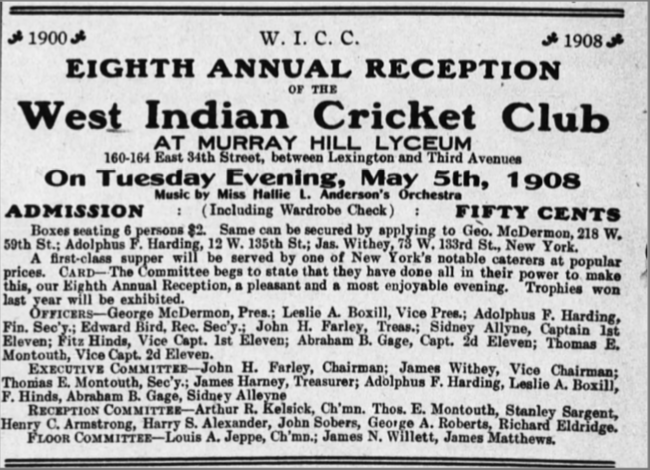 In Harlem, cricket was a game almost exclusively played by West Indian immigrants. The game had a prominent place in the West Indian community even before they relocated to Harlem.  One indication of the importance of cricket was that events that sought to bring together West Indians typically gave out prizes to the cricket club with the most members in attendance (1). Cricket’s international character extended beyond its players, with local black teams playing both visiting black teams from the West Indies and white teams from Australia in the 1920s. But the game had limited appeal beyond the West Indian community: the sports editor of the Amsterdam News wrote in 1930, “many right here in our city who look upon the pastime as one without the elements to make one thrill and not deserving of any consideration” (2). As a result, sports served to divide African Americans and West Indians in Harlem, literally sending them to different places on summer weekends. Before New York City’s black community relocated to Harlem, they played cricket at Prospect Park in Brooklyn, and at Van Cortlandt Park in the Bronx. In the early years of black Harlem, cricket and baseball shared the same neighborhood venues: Olympic Field and Lenox Oval, both near the river (3).  When those fields were lost to development, cricket returned to Brooklyn and the Bronx, alternate venues further from neighborhood than those for Harlem’s baseball teams. As well as playing in Prospect Park and Van Cortlandt Park, black cricketers used Commercial Field in Brooklyn, and, for one year, Pelham Park in the Bronx. By the late 1920s, cricket grounds in Brooklyn also began to face pressure from development. In the debates about how to use the dwindling space, they lost out to baseball: the area for cricket at Prospect Park shrank so it was only enough for small games not a league, forcing Brooklyn teams to play in Van Cortlandt Park (4).

Unlike baseball, multiple multiple games of cricket occurred at the same time and place. In 1928, New York City featured two 12-team leagues playing at Van Cortlandt Park, one playing 6 games on Saturdays, the other 6 games on Sundays (5). Cricket also drew far smaller crowds than baseball, rarely creating black spaces within the city as baseball games did. The season for playing cricket was shorter than for baseball, from mid-May to mid-September, although by the late 1920s the regular competition was interrupted for games against visiting teams.

Games against visiting teams drew large enough crowds to warrant being played in other venues (6). Innisfail Park in the Bronx was the site of games against the Australian team in 1913 and again in 1932, and a visiting West Indian team in 1928 and 1932 (7). That West Indian team, which played 29 games in New York City, also played at Dyckman Oval and at Starlight Park, a stadium in a Bronx amusement park (8). The West Indian team that visited in 1929 played all 18 of its games in Dyckman Oval; the team that toured in 1930 also played there (9).

Cricket declined in prominence in New York City after the first decade of the 20th century. As early as 1920, the New York Age reported that the inability to find somewhere centrally located to play led West Indian sportsman to give up cricket for other sports (10). Competition from baseball also contributed to cricket’s decline, including by limiting space for the game (11). In 1926, State Senator Higgins argued, “The cricket players are non-citizens. Most of them are West Indians. Some are Englishmen. But in any event they don’t play our national game and they shouldn’t be allowed to use the Parade Grounds. Their wickets and tea tables are in the way of the honest-to-goodness baseball players” (12). Most fundamentally, given the disinterest of African Americans in the game, immigration restrictions that limited the number of West Indians coming to New York City choked off the supply of new players (13).

If on one hand cricket helped maintain divisions between West Indians and African Americans in Harlem, the declining prominence of the game broke down those divisions and helped fuel an expansion in African American sports such as basketball and track and field. Answering  critics who thought cricket did not deserve attention, the sports editor of the Amsterdam News noted in 1930, “The majority of those men who made the sacrifices that later brought basketball to that place where thousands used to jam the casinos in its early days and later helped to lay the foundations for tennis, went from the cricket fields to other spheres of athletic endeavor the principles of the great old English games. Oh yes, field and track athletics also received its full share of inspiration at the hands of former cricketers, to say nothing of that old Scottish game–golf” (14).