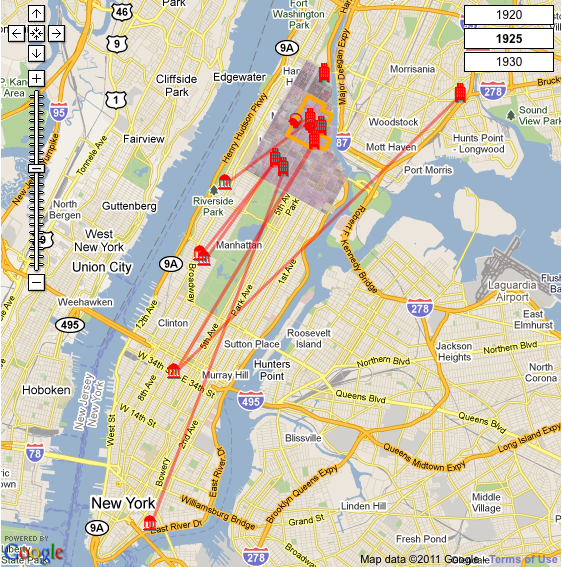 Annie Dillard*, an 18 year old native of St Kitts in the British West Indies, was admitted to the New York State Reformatory for Women in July 1924. (*This name is a pseudonym, as required by the New York State Archives). A judge committed her as a Wayward Minor, at the request of her sister, Rose. Dillard had arrived in Harlem in October 1918, likely after the death of her mother, to live with Rose and her husband at 121 West 137th Street.  Her arrival, in the company of an older sister, completed the family’s relocation to the city; one brother already lived with Rose, and the other and another married sister, Glennis, lived elsewhere in the city. Annie was raised by Rose, who was just seven years her senior, and by her account, that upbringing included the strict supervision characteristic of West Indian families concerned with respectability, including regular attendance at church, and the company of her sisters or family friends when she went to movies and dances.  Dillard attended PS 119, completing 8th grade, and then took dressmaking classes in the night school at PS 89 and a job as a domestic servant on West 102nd Street.

Domestic service represented the main occupation open to African American women in New York City, in part because white women increasingly shunned it in favor of factory and sales jobs, an alternative largely closed to black women.  Dillard continued to live with her sister, rather than her employer, Mrs Watt,  notwithstanding employers’ preference for live-in staff.  She was not alone in doing only day work; many black domestic servants were married and had families, making them unwilling to live in.  Housework generally took black women to different parts of the city than those to which men traveled for laboring jobs: Dillard ventured from Harlem to the Upper West Side and midtown, whereas laborers like Morgan Thompson went to Lower Manhattan, the East Side, and the outer boroughs.  In private homes, domestic servants usually performed a multitude of tasks, such as laundry, ironing, cooking, cleaning and serving. The hours were long, the status low and the supervision tight. Many black women complained that the work was too hard for the wages they received, and frequently changed jobs in search of higher wages, or pursued alternatives like work in beauty parlors. Annie’s jobs between 1924 and 1927 highlight that housework took forms other than service in private homes.  She worked as a chambermaid in the McAlpin Hotel in midtown and in a boarding house on West 75th Street.  Both jobs offered shorter hours than work in private homes: 9 a.m. to 4.30 p.m. at the hotel and part-time at the boardinghouse.  Dillard also worked at Park West Hospital on West 76th Street, probably cleaning.  In addition, she had a job in a laundry on Cherry Street in Lower Manhattan.  A commercial steam laundry was mechanized and organized like a factory, and a job there is more properly thought of as industrial work, but the tasks nonetheless bore some resemblance to those done in homes and hotels.

It was not workplace conditions that caused Dillard to go through this variety of jobs, but rather her home life. At 17 years of age, she became pregnant.  The man with who she had been having sexual intercourse had promised to marry her if that happened, and admitted to her sister Rose that he was responsible for Annie’s condition, but he later disappeared.  With no possibility of preserving the family’s reputation, Rose turned her over to the court.  Four months after Dillard gave birth to a daughter, she was paroled into the care of her other married sister, Glennis, a household that lived initially at 8 West 137th Street, and later relocated to the Bronx. But after four months, and a brief stay at the home of an aunt, at 2142 5th Avenue, Annie wrote to the Reformatory that she was “an outcast because she has bought disgrace upon her family,” and needed to return and get help finding work where she could have her baby with her.

After three months away, Dillard returned to Harlem, this time to again live with her sister Rose, who was about to give birth to another child and had agreed to look after Annie’s daughter so she could work.  But even a visit from parole officers after Rose appealed for their help in stopping Annie from staying out at night and seeing men only enabled the sisters to live together for three months, at which point Annie and her child reappeared again at the Reformatory.  Two parole placements as a domestic servant in upstate New York proved no more successful in allowing Annie to work and be a mother, and eight months later she returned again to Rose’s home in Harlem, which was now on St Nicholas Avenue.  She and her sister continued to clash over Annie staying out at night, but the household held together at least for the remaining eleven months of Dillard’s parole.