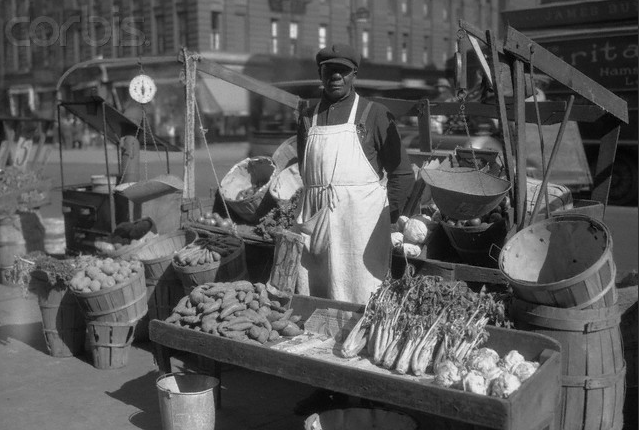 On Saturday evenings, as crowds thronged Seventh Avenue in search of entertainment, many residents of Harlem headed to Eighth and Fifth Avenues to patronize street markets.  Street vendors operated throughout the week, but those evenings were a particularly busy time as residents shopped for their Sunday dinners, the main meal on the one day or part day they had off from their jobs.

The city government determined the location of street markets.  According to a story in the Amsterdam News, it was around 1913 that the city established the first street market in Harlem, on the east side of Lenox Avenue from 138th Street to 142nd Street.  Within a few years, the expanding population of the neighborhood made those blocks too crowded to accommodate street vendors, and the city relocated the market to Eighth Avenue, further uptown, from 139th to 145th Streets.  These blocks, underneath the elevated railroad that ran the length of 8th Avenue, were on the boundary of Harlem, and too noisy and dirty to attract many pedestrians or events such as street speakers and parades.  (Street vendors still operated on Lenox Avenue, around the 135th Street subway station).

Soon after another market opened on the west side of Fifth Avenue from 132nd to 135th Streets.  As undesirable as Eight Avenue, these blocks were a “dingy avenue,” bordered on the east by the neighborhood’s least desirable tenement districts.

As was the case with Harlem’s stores, whites operated most street businesses – although photographers tended to pick out those operated by blacks.  Street vending did require less capital than operating a store: in 1930, the city charged $1 for a license and $1 a week for use of the street, while rental of a cart, from a business operating on 142nd Street, cost an additional $2 a week. An Amsterdam News journalist hopefully described the black vendors as the fruit or produce barons of tomorrow.  One of Harlem’s most famous identities did achieve wealth selling on the street,  but not by competing directly with whites in selling what most street vendors did. Lillian Harris, better known as Pig Foot Mary, sold pig’s feet and other southern hot food such as corn, fried chicken and chitlins, from a converted baby carriage stationed at Lenox and 135th Street, eventually making enough money to buy an apartment building on Seventh Avenue, and retire to California.

Most vendors sold vegetables, and apples, bananas and grapefruit, but no other fruit. A few sold regional delicacies – sugar cane and pomegranates for southerners, and dried fish and cassavas for West Indians — or hot food such as roasted peanuts and roasted yams.  Only whites sold goods other than food, more expensive items such as clothing, china, and kitchen utensils, although there was a black selling socks on Eighth Avenue in 1930.

Residents chose to shop at the street markets because they believed them cheaper than stores. Harlem’s newspapers sometimes criticized street vendors, joining in attacks on them as sources of disorder out of place in a modern city common in the early twentieth century.  L Baynard Whitney, in the Amsterdam News in May 1928, rejected the idea that residents saved money by buying from vendors, and criticized the quality of the produce sold on the street.  Labeling the markets “gutter markets,” he reported that on one wet Saturday night, “Decaying lettuce, spinach and cabbage leaves carpeted the sidewalks, while the gutters were choked with black mud, foul water and refuse.” Street vendors also had a reputation for cheating that threatened any savings shoppers might make.  Whitney found one vendor hiding two small sweet potatoes in the bottom of his scales to add half a pound of weight; others added weight by keeping their arms or hands on the scales when weighing goods.   Such conditions and complaints did not discourage custom, and street vendors remained a feature of Harlem into the 1940s, even as Mayor La Guardia closed street markets throughout the city.  By 1946 only ten of the sixty markets that existed in 1934 remained, but two of those markets were in Harlem.

Ella Mae Harper, “How Harlem Housewives Are Cheated Of Hundreds of Pounds of Vegetables and Meats Every Week by Shortweight Scales,” New York Age (August 14, 1926): 9