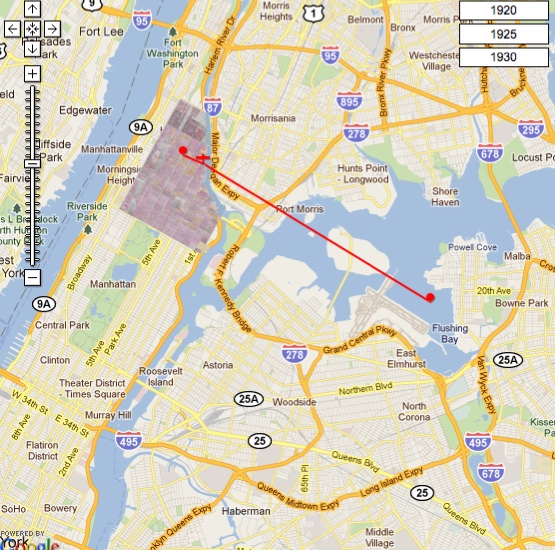 Hubert Julian, by his own account, arrived in Harlem in 1921.  Born in Trinidad in 1897, he had migrated to Canada in 1914, where he claimed to have learned to pilot an aeroplane and served as a Lieutenant in the Canadian Air Force, and came from there to New York City.  His first appearance above Harlem occurred during the 1922 UNIA Convention, when he flew over the parade in a plane decorated with UNIA slogans.  That flight led to his appointment as head of the organization’s new Aeronautical Department.[1]

Julian first gained celebrity by jumping from planes rather than piloting them.  He made his first parachute jump before an audience of Harlemites the day after the UNIA convention ended, at an airshow for the 15th Regiment at Curtiss Field on Long Island headlined by black pilot Bessie Coleman’s first flight in the United States. Several more jumps followed in the next year, at Curtiss Field and at airshows in Hasbrouk Heights, New Jersey (where he played “I’m Running Wild” on the saxophone during one jump).[2]  However, it was when Julian parachuted into Harlem itself that he garnered headlines.

On April 29, 1923, a black pilot, Edison McVey, flew Julian from an airfield in Hasbrouck Heights to Harlem, where the plane circled City College, at 139th Street and Amsterdam Avenue, dropping two powder noise bombs to attract residents’ attention – although a failed attempt two weeks earlier and advertising in the neighborhood and around the vacant lot on 140th Street near Seventh Avenue where he intended to land ensured that many had already been watching the skies. Then Julian leaped from the plane in a vivid red suit; the wind carried him away from his target to the roof of a tenement at 301 West 140th Street.  A large crowd followed him, packing tightly enough into the street to damage several surrounding stores, and then carried Julian to the UNIA’s Liberty Hall – but not before a police officer charged him with disorderly conduct.  Addressing the crowd, he spoke about aviation, promoted a parachute he had designed, and urged them to support A. I. Hart, a black-owned department store under threat from white competition. [3] On November 5, 1923, Julian was again flown to Harlem from Hasbrouck Heights, NJ, this time by a white pilot, to make a jump to advertise a UNIA meeting. He intended to land in St Nicholas Park, but wind carried him instead to the police station on West 123rd Street, as a huge crowd followed. He ended up hanging from his rigging between the station and the next building, until two officers pulled him into the second floor.[4]

In  1924, Julian shifted his focus from parachuting to flying, announcing a planned flight from NYC to Liberia and back. In April he lectured and performed parachute jumps in Boston, Baltimore and Norfolk to raise funds for a Boeing seaplane. Those efforts brought attention as well as money, and in May the Pittsburgh Courier reported that Boulin’s Detective Agency had found Julian lacked any qualifications as a pilot, and could not possibly make the flight. Julian answered his critics in June by bringing the plane he was purchasing to Harlem and putting it on display in a lot on 139th Street. He was scheduled to depart at 1 pm on July 4, from the Harlem River at 139th Street, but the several thousand people who gathered there were kept waiting for hours, while West Indian supporters and UNIA members collected enough money from the crowd to make the final payment on the plane. Once Julian did take off, the flight lasted only a few minutes, until one of the seaplane’s pontoons fell off, sending it crashing into Flushing Bay. This ignominious failure made Julian a joke in the white press, which in turn contributed to increased criticism of him in the black press.[5]

Julian himself remained undaunted, and through the remainder of the 1920s his efforts to raise funds for equally ambitious flights kept him a public figure in Harlem. He joined the soapbox speakers who lined Harlem’s avenues: in 1925, while selling donated safety razors at the corner of 140th Street and Seventh Avenue, he got into a fight with Herbert Boulin, the private detective who had exposed his lack of a pilot’s license, and later worked for Julian’s wife when she sought a divorce. In 1926, police seized Julian’s car after he attached a sign soliciting contributions to the cost of a plane for a flight to Liberia to it and left the vehicle parked overnight, apparently in response to police banning him from soliciting on the street. Julian claimed those backing the flight included a West Indian subsidiary of Standard Oil, boxer Tiger Flowers, and Elks Lodges, but it never took place. In 1928 Julian set up a headquarters for the Hubert Julian Aeroplane Fund at 2196 7th Avenue, seeking funds for a plane to make a round trip flight to Paris. This flight had the backing of State Senator Spencer Feld, but the response proved disappointing, and Feld abandoned the effort after 6 months.[6]

Although Julian never made a flight across the Atlantic, he achieved enough celebrity to make that journey by sea in 1930, after being invited by the new Emperor of Ethiopia to take part in his coronation ceremony. He impressed his host with a parachute jump that landed at his feet, and was rewarded with a position in the Ethiopian Airforce; the Emperor’s mood changed four months later when Julian crashed a plane gifted to him by Selfridge’s department store during a pre-coronation rehearsal. Julian left Ethiopia soon after, arriving back in Harlem in November, but insisted he had not been banished, successfully suing the Hearst publication the New York American for stating he had been “thrown out.”[7]

In 1931, Julian obtained a pilot’s license and embarked on the air show circuit, barnstorming around the country, appearing, for example, as part of a group of black aviators, the Five Blackbirds, in Los Angelos in December 1931.  Harlem remained his base, and through the 1930s he continued to fly above events in the neighborhood, such as A’ Leila Walker’s funeral procession in 1931, and a parade by Father Divine’s followers in 1934.  His aerial exploits appear to have ended by the 1940s; in later decades it would be Julian’s activities as an arms dealer that brought him media attention.  At some point in these years he joined many other black New Yorkers in relocating outside Harlem; when he died in 1983, Julian was living in the Bronx.

0 thoughts on “Hubert Julian in Harlem”