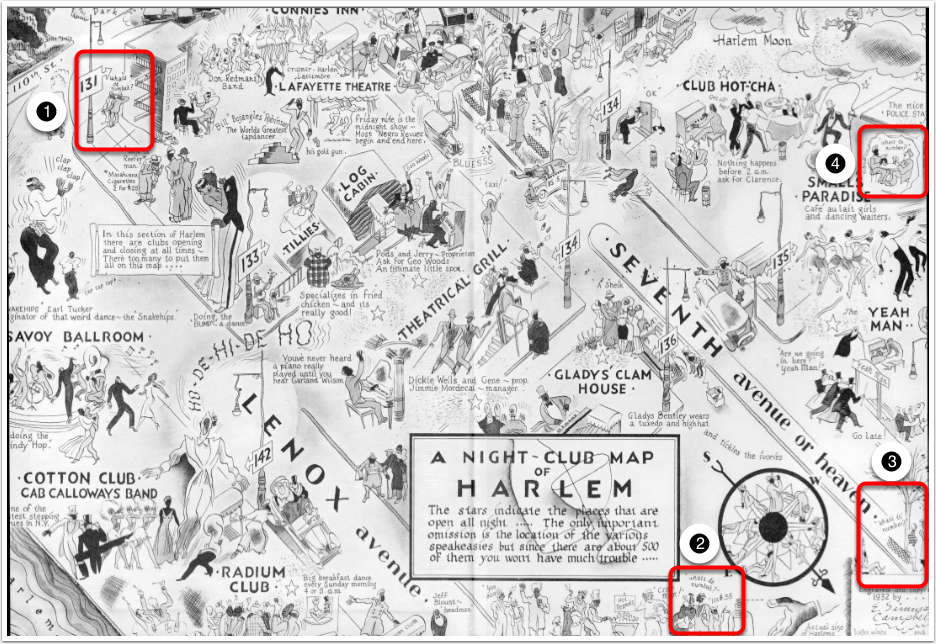 Numbers gambling formed part of the rhythm of Harlem’s street life. A map of arrests for playing the numbers in 1925 features almost every corner on Fifth, Lenox, Seventh and Eighth Avenues. Those arrests generally took place in the morning, when players seeking to place bets on their way to work and before before the publication of the daily number at 10 a.m. created a flurry of activity.  By all accounts, making such arrests would not have been difficult: the New York Age reported that runners and collectors followed “a regular schedule each morning, picking up their collections and there is nothing clandestine or hidden in their movements,” as they walked “boldly and openly along, picking up the slips with the money from the players on the streets.” (1)

Few details of what occurred in these cases appear in the legal record, with the clerks in the Magistrate’s Courts generally concerned only with recording the number of slips found in the defendant’s possession, but they occasionally included some mention of the circumstances of the arrest, such as one officer’s statement that the he had watched a man “accept a slip of paper and some money in coins from an unknown man” on the corner of 5th Avenue and 130th Street, and then followed him to 5th Avenue and 129th Street and seen a similar transaction take place. (2)  Other officers observed individuals being approached by a series of people, entering into conversation with them, and then accepting money and slips. Neither police or observers got close enough to hear the conversations between runners and players, but those exchanges constituted a crucial part of playing the numbers.  One exchange that did make it into the record, as part of a statment describing the lead up to an assault, began when a runner called over the superintendent of the building outside which he was collecting bets:

“What did you dream.”

“I saw a clock and the hands of the clock, one hand on five and the large hand on eight.”

“Yea. You ought to play five eighteen.”

“I don’t play numbers but give me 18, I’ll play a combination. Five and five is ten and eight is eighteen.”

The superintendent placed a bet of 18 cents, and his number came up, a win that should have been worth $16.50, but the runner said his banker had gone broke and could not pay. (3)

In addition to placing bets, residents discussed numbers on the streets.  “It is a common sight, of mornings, to see two or three individuals, and they are not always of the lower strata, putting their heads together over slips containing presumably the numbers they have played,” according to one observer. (4)  Further evidence of the ubiquity of such discussions can be found in cartoonist E. Simms Campbell‘s widely reproduced 1932 “Nightclub Map of Harlem,” which featured illustrations of street life alongside its better known images of Harlem’s performers and venues.  The map features four different, widely dispersed groups whose involvement in numbers gambling is indicated by the captions, “What’s de numbah?” and “What’s th’ number?”

The dispersion and diversity of the four groups capture the ubiquity of numbers in Harlem:

(#1) A pair of men (perhaps one is a runner?) on the corner of 131st Street and Lenox Avenue, identified as one of the seedier parts of Harlem by the nearby garbage and the illegal marijuana sale taking place just down the street.

(#2) A woman shopping for dinner (with a chicken in her bag) and a clergyman, alongside a collection of street vendors and street speakers.  These figures are clearly represent respectable Harlem, with the churchman’s involvement a dig at the hypocrisy of many clergy’s opposition to playing the numbers.  Their location amongst street vendors, and the bag indicating that the woman is in the midst of grocery shopping, intertwines numbers gambling with everyday activities.

(#3) A fashionably dressed woman and man (perhaps a runner) on Seventh Avenue, Harlem’s main street, which is captioned “or heaven,” just uptown from the most famous nightclubs.  This couple are very different in character and location from #1 and #2, indicating the reach of numbers across the strata of Harlem’s places and population;

(#4) Two officers playing cards in the police station, almost certainly intended to indicate their involvement in, rather than policing of, numbers.  That one officer is white highlights the spread of numbers beyond the black community in the 1930s