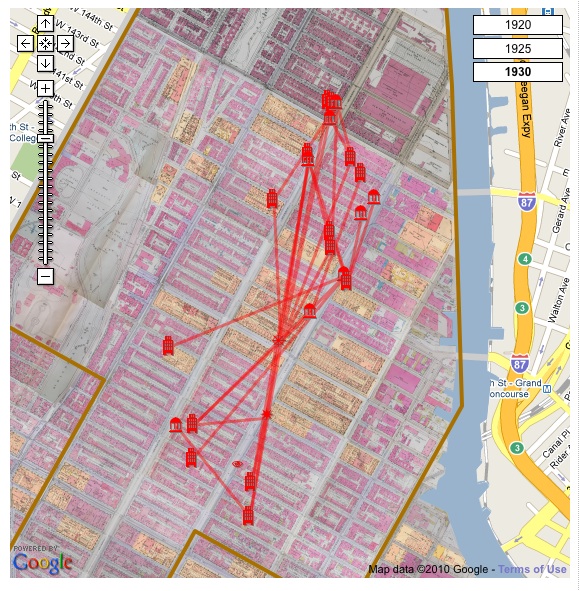 Roger Walker* was a nineteen-year old native of North Carolina and restaurant worker placed on probation after being convicted of trying to burgle a drug store in 1930, when he was unemployed and without money for food (*This name is a pseudonym, used at the request of the Municipal Archives).

The map of Walker’s life during the four years he spent on probation reveals an experience quite unlike that of Morgan Thompson* and Fuller Long*, two other men whose lives feature in our article “This Harlem Life” who have been the subject of blog posts. In the first place, Walker changed residence far more often than they did, living at fourteen different addresses in four years.  He did not set up his own household, but rented furnished rooms in apartments.

Lodgers such as Walker were a ubiquitous and growing population in 1920s Harlem, present in perhaps half of all households by 1930 (including that of Morgan Thompson).  Many were related to their landlords; Walker lived for his first two years in Harlem with an aunt and uncle who resided on West 153rd Street.  When they returned to the South, he retained some ties to family by sharing a room with a cousin, with whom he entered into an agreement that in the event that one was out of work, the other would pay the entire rent.  After 19 months of living together the two men quarreled, and from then on he shared rooms with unnamed friends — with his cousin occasionally helping with rent and bills — until he married.  Even then, Walker was not able to set up his own household; he and his wife lived with her married sister and husband. His mobility in the interim sometimes reflected an inability to pay rent, but on other occasions simply the unstable nature of relationships with roommates and landlords and his life in general. Observers, particularly white social reformers, worried that lodgers threatened the stability and morality of the families with who they lived; Walker, however, appeared to have little to do with his landlords.  He spent most of his leisure time outside his residences.

Certainly, furnished rooms did not offer attractive places to do anything other than sleep, usually being equipped with no more than beds, a stove for heating, a chair, lamp, and perhaps a bureau.  For lodgers, the streets and businesses of the neighborhood functioned as part of their home: restaurants and chop suey joints were their dining rooms; speakeasies, pool halls and movie theaters their parlors and sitting rooms.  Walker preferred to spent his time at the movies, attending four or five shows a week, a fairly typical activity for Americans in these years, even as the Depression hit.

The map of Walker’s life is also strikingly different from those of Thompson and Long because employment did not take him outside Harlem, as it did in the case of the other two men, and almost all residents of the neighborhood.  Rather than laboring, Walker worked as a kitchen hand, counterman or soda dispenser in restaurants and drug stores (with soda fountains), which were found in abundance the length of Lenox and Seventh Avenues.  He often worked 12 or 13 hours a day in these positions, and even overtime beyond those hours; in other cases he worked the night shift. While he worked in Harlem, Walker,  like Thompson and Long, would still likely have been employed by whites, who controlled almost all the businesses in Harlem.

Service work was not by nature as itinerant as was the laboring work done by Thompson, but Walker changed jobs repeatedly, holding nine different positions during his four years on probation. He lost some of those positions due to cutbacks resulting from the Depression, but more often he quit or was fired as a result of disputes about unpaid or inadequate wages and taking days off.  In October 1933, Walker’s fortunes took a turn for the better, and he secured one of the best jobs available in his line of work, as a waiter in a Pullman dining car traveling between New York City and Chicago.

A more detailed account of Roger Walker’s life in Harlem can be found in our article, “This Harlem Life: Black Families and Everyday Life in the 1920s and 1930s,” which appears in the Fall 2010 issue of the Journal of Social History.