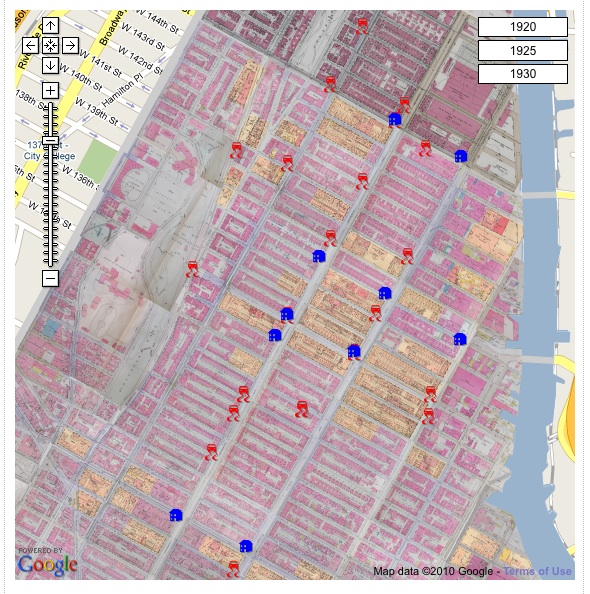 In the mid-1920s, an average of almost ten people a day, including two children, suffered injuries in automobile accidents between 130th and 155th Streets. Reports of those accidents regularly appear in the black press, and occasionally in The New York Times, and in some cases led to felony prosecutions that appear in the District Attorney’s Case Files.

The accidents on this map are those reported in January and July 1925 and 1930, together with some prosecuted in other months of those years, and a handful of prominently reported incidents from other times. The largest number occurred on or near Lenox and Seventh Avenues.  Those two streets saw more traffic than any other roadway north of 59th Street, helped by people traveling to and from events at the Polo Ground and Yankee Stadium.  Public transport also ran on both avenues:  street cars traveled on Lenox from 116th to 148th Street (and on 125th and 135th Streets), and double-decker buses ran on Seventh from 110th to 155th Street.

School children’s encounters with this traffic provoked particular concern. One of Harlem’s public schools, PS 89, was located on Lenox Avenue, and children walking to the neighborhood’s other schools also had to cross the busy avenues, often on their own.  Gordon Parks gave this photograph, which he took after this period, in 1943,  a caption that reflects the ongoing concern about that situation.

Harlem’s black leaders agitated for traffic police to be stationed at the most dangerous intersections.  Sometime around 1920, their efforts saw an officer stationed at 135th and Lenox, the most dangerous intersection, with others added at 138th and Lenox and 145th and Lenox.  Additional posts were added on 5th Avenue and Seventh Avenue in 1921 and 1924, and in 1925 officers were placed on 134th and 135th streets during school hours.  But by 1928, a columnist in the NY Amsterdam News reported only five posts in operation: on Lenox at 125th and 135th streets, and Seventh at 125th, 135th and 145th streets.  Moreover,  posts were only manned from 8.30 am to 6.30 pm, while traffic was often heaviest in the evenings, when crowds descended on Harlem’s nightlife.

Traffic posts occupied a prominent position in images of Harlem because many were manned by black officers, with Reuben Carter the first and best known.  In March 1921, he was assigned to the post at 135th and Lenox, the heart of Harlem, next to the subway station by which many came to the neighborhood.  At 6 feet 2 inches tall, weighing 250 pounds, he became a symbol of what African Americans could achieve in New York City.  Columnist Lester Walton reported that for many months after he occupied the post, “Negroes lined the sidewalks to watch him ‘do his stuff’.”  What most engaged the crowd was the sight of a black man directing white drivers.  That image was confronting enough for whites that in 1926 the police department rejected Carter’s request to be transferred to the post at 125th St and Lenox Avenue, in the midst of the white business district.  By 1928, 3 of the 5 Harlem traffic posts were manned by black officers, with the exceptions being the two posts on 125th Street, where white officers held sway.

For all his symbolic power, Officer Carter, and his colleagues, could not control the traffic.  In fact, on at least one occasion, Carter was himself hit by a vehicle while at his post. Nor did the signal lights installed on the avenues in 1928 appear to help much; a misunderstanding of the signals was a common explanation given for crashes.

Given that most drivers, including all those driving public transport and most behind the wheel of taxis, were white, many crashes were interracial affairs. Some flared into confrontations that drew in bystanders. Such was the case one afternoon in June 1925, when a crosstown streetcar hit a black laborer named Thomas Emanuel as he tried to cross 145th Street near Seventh Avenue. He apparently suffered only minor injuries, at least until he demanded an explanation from the white motorman.  What Emanuel got was an insult, sparking a fight in which the two men traded blows, another motorman joined in and countless bystanders followed suit.  Accompanied by a cacophony of swearing, screaming women and children, whistles and car horns, the crowd fought for twenty-five minutes, stopping traffic, until a police officer finally arrived.