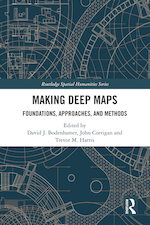 A book chapter I co-authored with Lincoln Mullen, “Navigating through narrative,” has appeared in Making Deep Maps: Foundations, Approaches, and Methods, a collection edited by David Bodenhamer, John Corrigan and Trevor Harris and published by Routledge. It draws on both our larger project on argument-driven digital history and my project on the racial disorder in Harlem in 1935.

The chapter was written in 2017, based on a presentation at the German Historical Institute in 2016 on my preliminary spatial analysis of the racial disorder in Harlem in 1935 presented using Neatline. Four more years of work on the project have changed both my interpretation of the disorder and my approach to presenting that research. Rather than a map-based narrative, I am using Scalar to present the project as a multi-layered, hyperlinked narrative that connects different scales of analysis: broad narratives, aggregated patterns, and individual events. That structure reflects an emphasis on developing contexts for the patterns identified in this chapter, and offering details of individual events, those involved in them, and the evidence from which I have reconstructed those details.

Building on a move in digital history toward making explicit arguments, this chapter extends the concept of the deep map by exploring how they provide a context for spatial narrative. Narrative might be seen as closing off some of the multiple sources and voices inherent in a deep map, but we argue that it instead provides a way to craft meaningful experiences from an amalgamation of sources. We propose an understanding of the relationship between deep maps and narrative in which a user navigates a deep map through a narrative created by the author. Rather than a pathway akin to that offered by story map platforms, which are strictly linear and either narrowly focused on particular points or limit interaction with maps, such a spatial narrative retains the spatial context of the deep map. The chapter provides a concrete demonstration of this possibility, a prototype narrative map created using the Neatline platform to explain the 1935 Harlem riot. This spatial narrative is based on the deep maps created as part of the Digital Harlem and Year of the Riot projects, but it extends them as a way of navigating through the maps to explain the riot as a complex and multifaceted event.