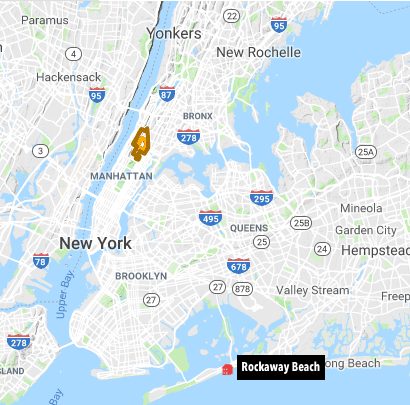 In summer, day trips to destinations near Harlem became part of residents’ leisure. Social clubs gave up their weekly gatherings for the season in favor of trips outside the neighborhood, and, particularly by late 1920s, to the beach.  Beginning in the early 1920s, Rockaway in Long Island became Harlem’s beach resort. Individuals travelled by train and bus, and church groups, Sunday schools, and social clubs chartered buses, typically on Thursdays, Sundays and holidays (1). By 1928, as visitors from New Jersey and Westchester county joined those from Harlem, blacks dominated the crowds bathing and playing games, displacing the white groups who had previously vacationed at Rockaway. A 1929 story claimed that on one Sunday in July “no less than 50,000 colored people occupied a section of this beach one and one half miles long.”  In the process they claimed a black place amidst a landscape in which the New York Age saw “the various racial groups in New York…segregating themselves at separate beaches—the Jewish and Italian-Americans are the largest patrons of Coney Island, with the Irish and native American stock predominating at Brighton Beach, …the Germans have the beaches at Throgg’s Neck and City Island in the Bronx, with Rye Beach on Long Island Sound becoming the rendezvous of the upper class native whites (2).”

However, while blacks dominated the crowds at Rockaway, whites owned and staffed the businesses, replicating the situation – and the interracial tensions – that occurred in Harlem. A white commentator in 1928 portrayed the changed racial make-up of the beachgoers as a seamless transition, but the Amsterdam News reported incidents in which whites called for the exclusion of blacks from Rockaway Beach in May 1925, and again in August 1927 (3). Tensions between black visitors and  white residents and business owners in Rockaway continued to flare periodically through the 1930s. White bathhouse owners regularly refused admission to blacks, claiming they were full, and leaving them without a place to change into their swimwear. An Amsterdam News journalist claimed in 1939 that the inaction in the face of persistent discrimination resulted from the black bathers being from “the small income groups” rather than “the ‘swells’ of Sugar Hill” who lead Harlem’s political organizations (4).

Rockaway Beach loomed large enough in Harlem’s consciousness to be featured in a musical performance at the Abyssinian Baptist Church’s 120th anniversary celebration in 1928, and a Revue at the Alhambra Theater in 1929 (5). For those who could not afford to travel to Long Island, the Lincoln Recreation Center that opened on 147th Street in 1930 advertised itself as “Bringing a Rockaway to Harlem.” The owners delivered on that claim at least to the extent of filling the center’s 15,000 square foot beach with “Real Rockaway Sand.”

The only image of African Americans at Rockaway Beach I could find is by white painter Reginald Marsh.  He painted scenes of working class life in New York City, focused on crowds and leisure, including theater, burlesque houses and dance halls, as well as beaches. As with many of Marsh’s paintings, this one presents a highly sexualized world populated by exaggeratedly voluptuous women, with racial stereotypes mixed in.