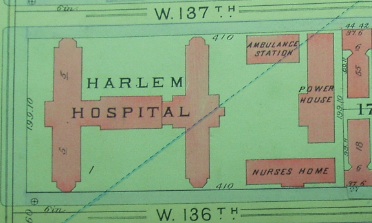 Harlem in the 1920s was not well served by hospitals.  One public hospital was located in the neighborhood, but continued to be dominated by whites throughout the decade. Blacks did operate four small private hospitals, but they charged fees beyond the resources of most blacks and were not well-supported by those who could afford them.

The public institution, Harlem Hospital, stood on the block between 136th and 137th Streets, on the east side of Lenox Avenue, one block north of its current location.  It opened on April 13, 1907, providing 150 beds, facilities that were proving inadequate as early as 1911.  An additional wing and a Nurses Home were added in 1915, increasing the capacity to 390 beds. Although by 1926 the hospital was again overcrowded, further expansion was not undertaken until the 1930s.  (The building on the block between 135th and 136th Streets did not open until 1969). Despite its location near the heart of Harlem, the hospital remained essentially a white space. It had no black staff until some nurses were hired in 1917, no black physicians until Louis T. Wright was appointed in the Out-Patient Department in 1919, and no black doctors able to visit patients or conduct surgery until 1925.  By 1930, there were still only 25 black physicians on the in-patient, out-patient and intern staff, with whites in all the leadership positions.  The majority of the nurses were blacks, including graduates of the training school opened in the hospital in 1923, but  whites still formed the leadership of the nursing staff.  Even the majority of the non-medical staff were white.

Perhaps most strikingly, as late as 1929 whites also made up a third of the patients, coming from the southern end of the hospital’s district, which reached from the East River to St Nicholas Avenue and from 145th Street down to 110th Street.

There were several small black-run private hospitals in Harlem.  The Booker T. Washington Sanitarium opened on 7th Avenue between 138th and 139th Streets in 1920, offering inpatient treatment for those with tuberculosis. In 1925 it was merged with the Edgecombe Sanitarium, when a group of black physicians purchased Brunor’s Sanitarium, located on the corner of 137th Street and Edgecombe Avenue. That hospital had 15 beds, and 3 nurses, and admitted 255 patients in 1929.  Also in 1925, Dr Wiley Wilson expanded his offices on the corner of 138th Street and 7th Avenue into the Wiley Wilson Sanitarium, with 8 beds and 3 nurses in attendance.  In 1929 Wilson’s hospital admitted 220 patients, 80% for surgery.

Dr Conrad Vincent undertook an even more ambitious expansion of his practice, opening the Vincent Sanitarium at 2348 Seventh Avenue in March 1929 (less than half a block from Wilson’s Sanitarium).

The new owners operated it as the International Hospital, with noted Harlem Renaissance author and physician Rudolph Fisher as superintendent.  Although the institution treated 350 patients in its first 8 months, 1/4 of who were white, it went bankrupt in October 1931.  The hospital then passed into the hands of whites.  An editorial in the New York Amsterdam News blamed divisions among Harlem’s black physicians, which caused many to fail to send patients to the hospital.  The paper’s own medical columnist, Dr Lucien Brown, disagreed, blaming instead the limited number of residents with funds for private care, and the preference for white institutions of those with money to spend, a choice based on what he termed exaggerated accounts of deaths in black-run hospitals.