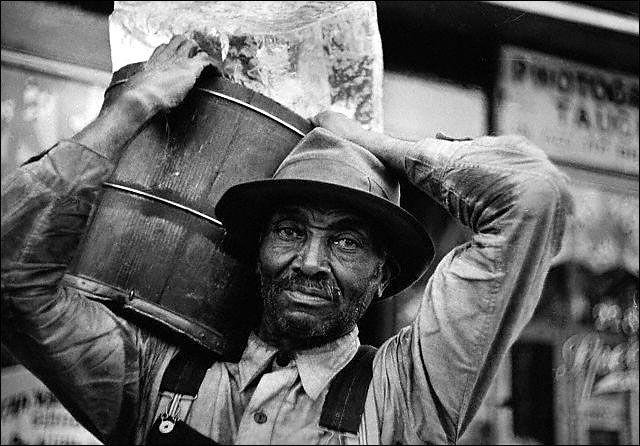 Ice dealers were prominent among the white deliverymen, salesmen and bill collectors who ventured into the residential blocks occupied by blacks. In an era before widespread electrification, Harlem’s residents and businesses relied on ice to store food as well as to cool drinks. For much of the 1920s, Italians enjoyed what the New York Age called “a practical monopoly in serving ice to the homes of Harlem.”

They typically operated out of cellars, usually located near intersections, buying ice from wholesalers, who carted it from the Colonial Ice and Coal Company, on Eighth Avenue and 151st Street, and delivered it to residents and businesses in the surrounding blocks.  Unlike almost all other white businessmen, at least some icemen also lived in Harlem. *Vito Passantino, an Italian ice dealer on probation between 1930 and 1935, for example, lived in a furnished room on West 132nd Street, and later with another black family, to whom he had sold ice for several years, at 21 Maccombs Place. (* This is a pseudonym as required by Municipal Archives)

A business that required relatively little skill and capital, the ice trade was within reach of some of the blacks who came to Harlem in the 1920s. Italian icemen secured their trade against black competition through agreements with janitors and superintendents for exclusive access to a building’s residents. However, the biggest obstacle reported by blacks seeking a share of the ice trade was “the average Harlem Negro.” “Time and time again,” L. Baynard Whitney wrote in the Amsterdam News, “they have been told by colored people, ‘I don’t want no nigger iceman!’.”  The ice trade was the subject of a widely reported joke about the unwillingness of blacks to patronize businesses owned by members of their own race.  As recounted by Lawrence Levine, the joke concerned a black ice dealer in a small southern community who had both black and white customers:

When a white competitor came into town, one Negro lady immediately began to buy from him.  “Now why did you stop buying from John?” her white neighbor asked, “he was so courteous and nice, and we did business with him a long time.” “Well I tell you truth Miz George, I tell you just why I changed,” the black woman replied, “that white man’s ice is just colder than that nigger’s ice.”

Despite such attitudes, by 1928, between twenty and forty black dealers did sell ice in Harlem. *Vito Passantino’s experiences suggest that some of those gains had been achieved by force.  When he opened a cellar on West 148th Street, a black dealer across the street threatened him if he did not close. Subsequently the sign in front of his cellar was stolen, and in subsequent months, his cart broken and advertising board taken, and he also lost a number of customers. Within a few months *Passantino abandoned the business.

By 1931, the number of blacks dealing in ice grew to 120, and they sold more tonnage than any single white company.  In July of that year, two Italian companies, fighting over who would control the Harlem trade, now the richest in the city thanks to the spread of electrification in other neighborhoods, began selling ice at half the usual cost.  As black retailers saw their business evaporate, some responded with violence: one, having carried 75 pounds up five flights of stairs only to find a white dealer had taken his customer, returned to the street and assaulted the man with an ice stick.

A new organization also appeared, the Afro Ice Dealers Association, initially consisting of 25 trucks and 50 cellar dealers.  Unable to negotiate a new agreement with their supplier, the Association threw itself into the price war, undercutting the white companies.  With the support of the Harlem Housewives League and the National Negro Business League, they took to the streets in trucks displaying placards adorned with the Association’s name, and slogans such as ‘Give Us A Break,” and “We Will Stick It Out Though We Starve,” and went house to house.  Harlem’s residents gave them their business, even when the Italian companies countered by staffing their trucks with black workers, and within ten days a truce had been negotiated, returning prices to their original levels. Just how many blacks returned their custom to white dealers once the discounted prices ended is not clear, but *Vito Passantino was able to find work with Italian ice dealers doing business in Harlem as late as 1935.

“Harlem’s Colored Ice Dealers Are Making Determined Fight For Share of Business Among Their Own People,” New York Age, July 21, 1928, 1.