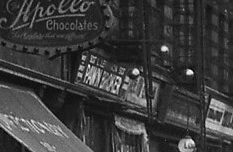 Frank Hamilton*, a twenty-three-year-old born in Memphis, Tennessee, raised in Arkansas, and educated at the Tuskegee Institute in Alabama, was placed on probation in 1928 after stealing three suits from the midtown clothing store where he worked as a porter. (*This name is a pseudonym, used at the request of the Municipal Archives) He had resorted to theft in an effort to support an expensive lifestyle.  Hamilton rented what his probation officer described as a “luxuriously outfitted” apartment, with walls adorned with photographs of beautiful women, in a “high class apartment building with every modern convenience,” where he entertained young men and women from “good circles,” dressed stylishly.  Rather than helping pay for this lifestyle, the theft made it even less sustainable: Hamilton was required to pay $500 in restitution, which meant that even though he found a new job as Pullman porter, he had less to live on.  Nonetheless, in September 1929, he married Alice, a woman he had met in Atlanta before coming to New York, and set up a home for them in a ‘high class building’ at 582 St Nicholas Avenue.

Hamilton had bought the radio and furnishings for his new home on installment plans, putting himself almost $1000 in debt, a sum equal to almost six months wages for a Pullman porter — a fact his new wife discovered only after he was arrested in November 1929 for failing to make restitution payments. That debt was owed to white-owned businesses, including two large stores on West 125th Street, the major retail district on the southern edge of Harlem still dominated by whites.  Hamilton was not satisfied with devoting all his income to clearing those debts, instead looking to Harlem’s underground economy to get ahead.  He gambled fifty cents a day playing numbers, insisting that the odds of winning were too good to refrain (actually one in a thousand), and talked of buying an interest in a speakeasy or running a dice game, working briefly in two nightclubs.

Hamilton also used Harlem’s pawnshops to go even further in debt.  In July 1931, he showed his probation officer $200 of tickets for pawned clothing and jewelery. Such a collection horrified the officer, who could only attribute it to a need to pay gambling debts.

However, Harlem residents, like other working-class Americans, did not pawn goods only out of desperation, as the officer imagined, but as a survival strategy, a means of obtaining cash to tide them over to pay day, or to pay rent or other bills that had become due, circumstances that recurred in the economic rhythm of the lives of individuals only able to obtain intermittent work.  Banks did not accept personal property as collateral, and rarely made loans to blacks; in fact, few, and in some periods, none, operated in Harlem. But at least sixteen pawnshops did, owned by Jews, providing modest access to white capital.

Hamilton’s refusal to pursue a respectable, middle class life led to fights with his wife; once he lost his job in June 1930, the relationship quickly fell apart.  Alice left to live with relatives in Long Island, and he moved into a furnished room, incurring further debt to put his furniture into storage.  The forwarding address Hamilton left, for many weeks the only means his probation officer had of trying to locate him, was a barber shop on 7th Avenue. Centers of sociability, barber shops fostered a male world less concerned with respectability than the fraternal orders and churches frequented by other, older Harlem residents like Perry Brown, while still providing similar services, like help finding work. Even as Hamilton immersed himself in that world, and relocated frequently, his wife’ eviction, unemployment and illness led her to re-establish a home with him four times in the twenty-two months after they separated, until a particularly violent fight led her to leave permanently.

To support herself, Alice became a domestic servant, giving up an ambition, nurtured by two years of study at a junior college, to be a social worker.  For Hamilton, by contrast, a middle-class life remained within reach.  At end of his probation, he had a permanent position as a porter for Russell Sage Foundation, was using their library to prepare to finish high school and contemplating studying sociology, and had joined the YMCA and St James Presbyterian Church — and still owed several hundred dollars to two furniture stores, $288.33 in restitution,  $70 to the storage company, and $87 for a radio he had long since sold.

A more detailed account of Frank Hamilton’s life in Harlem can be found in our article, “This Harlem Life: Black Families and Everyday Life in the 1920s and 1930s,” which appears in the Fall 2010 issue of the Journal of Social History.

0 thoughts on “Frank Hamilton: A life in debt in Harlem”