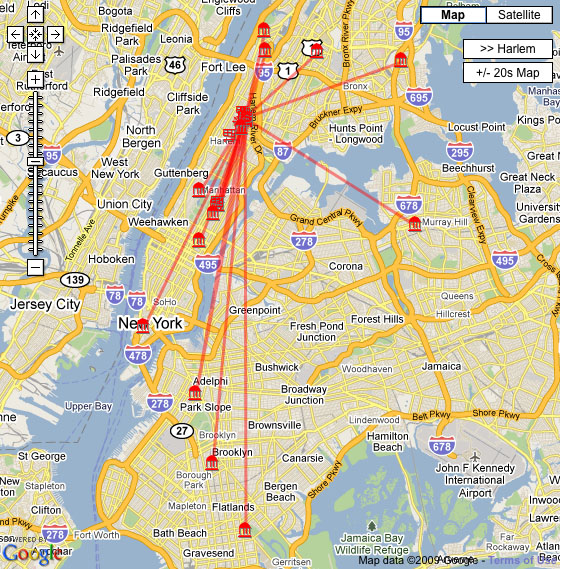 A West Indian, born in 1888, who arrived in Harlem in 1917, Morgan Thompson* was convicted of assault in 1928 after he lost his temper and stabbed a man who had confronted his seventeen year old son  on West 144th Street.

(* This name is a pseudonym, used at the request of the Municipal Archives)

The most striking feature of Thompson’s life revealed by mapping it is the distance from Harlem that he traveled to work. He was employed as a laborer by construction contractors. Between 1928 and 1933, the years he spent on probation, he labored on fifteen different constructions sites, in downtown Manhattan and on the Upper East Side, and in the outer boroughs of Brooklyn, Queens and the Bronx.  Only once did he work in Harlem, on the new YMCA on 135th Street. (Note: some of the addresses outside Harlem are approximate locations) Laboring was by nature itinerant work, but employment in the other occupations open to blacks was also unstable and required them to travel beyond Harlem, producing the crowds photographed pouring out of the 135th Street subway station in rush hour, in this image from the Survey Graphic Harlem Number.

Laboring, like many of the jobs open to black men, was also dangerous. The previous September Thompson had suffered a workplace injury, for which he received compensation. Within a month of returning to work after his arrest, Thompson injured his ankle so badly that it would be three months before he could put sufficient weight on it to work.  And then, after only a month back at work, Morgan suffered a smashed finger.

In Harlem, in 1928 Thompson lived with his wife of seventeen years, Margaret, a domestic servant three years his junior who also hailed from the West Indies, and two children, George, and fifteen-year-old Elizabeth. The same four bedroom apartment at 116 West 144th Street had been their home for all eleven years they had resided in New York City.  Part of the attraction would have been that West Indians  made up three quarters of those who lived in the building.  Thompson also sought out fellow immigrants in his leisure time, joining the Victoria Society, a West Indian social club with rooms on West 137th Street, and occasionally attending an Episcopal Church on 140th Street, whose members would have been overwhelmingly West Indian.

In April 1929, the family were evicted from their apartment, unable to pay their rent due to the injuries that kept Thompson from working.  In relocating, Thompson refused to consider cheaper apartments, which he considered uninhabitable, and chose instead a six room apartment on West 143rd Street, close to their old home and community.  The family rented the extra rooms, with several individuals and a married couple occupying them in the ensuing years.  Taking in lodgers was a common strategy to help pay the rent; one third of the other tenants in the building also had lodgers in 1930.  The Thompsons also relied on the wages of the two children; George had a position in a dress factory, and later as a scarf maker, and his sister Elizabeth was employed in a hat factory.  Any surplus money they had George deposited in an account at the Empire State Bank on 125th Street. When the children too lost their jobs as the Depression worsened, Morgan was able to obtain work through relief agencies, allowing the family to remain in their new home at least until 1933, when his probation ended.

A more detailed account of Morgan Thompson’s life in Harlem can be found in our article, “This Harlem Life: Black Families and Everyday Life in the 1920s and 1930s,” which will appear in the Fall 2010 issue of the Journal of Social History.