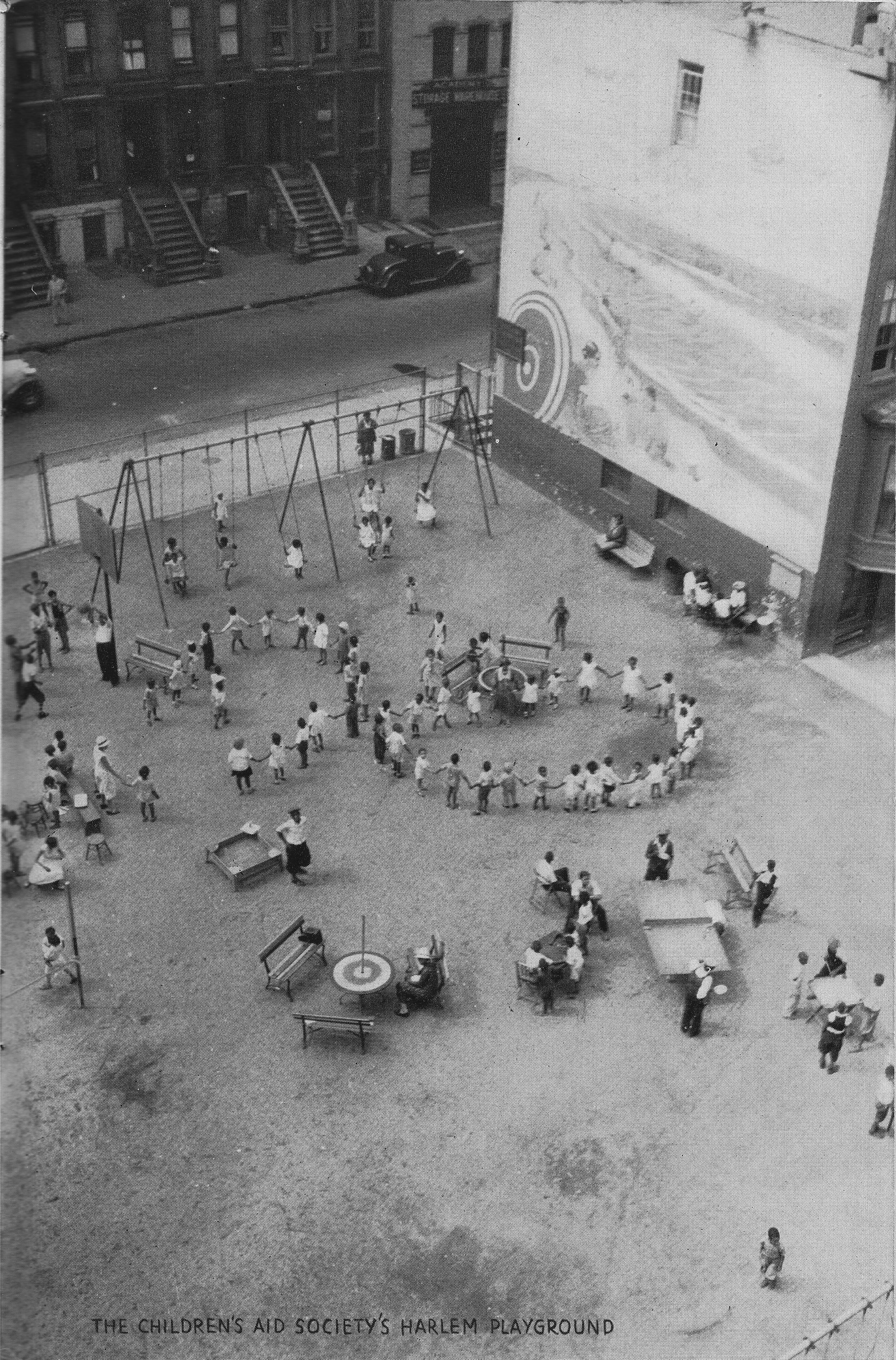 Harlem’s leaders lobbied for playgrounds to protect “children of school age, whose parents are away from home all day by reason of their occupation, who are left to seek recreation on the streets after school hours” (1). Traffic posed the biggest threat; drivers found it difficult to negotiate children playing games of baseball, basketball and punchball in the streets. In the mid-1920s, an average of two children a day suffered injuries in automobile accidents between 130th and 155th Streets. Even as the city government constructed playgrounds in other neighborhoods, it neglected Harlem. The Children’s Aid Society estimated in 1930 that Harlem had only 15% of the recreational facilities its population needed (2). The efforts of Alderman John William Smith saw the first city playground in Harlem open in 1923. Located in St Nicholas Park, between 139th and 141st Streets, it was on the western boundary of black settlement, at a remove from many black children and families (3). The city leased a second city playground in 1928 on West 147th Street near Harlem’s northern boundary (although by 1932 that playground was being operated by a community group) (4). As the black neighborhood expanded north, it took in another city playground, in Colonial Park at 150th Street, that had been established in 1911.

In 1930, the Children’s Aid Society (CAS) purchased ten lots for a playground in the block between West 133rd and West 134th and Lenox and Fifth Avenues, demolishing most of the buildings, and adding four additional lots with funds provided by Rockefeller. All but three of buildings were demolished; one building was used for a girls club, and the others for a boy’s club pending a fundraising drive to support a new clubhouse with a gymnasium and swimming pool. The playground covered more than 11,000 square feet and featured two sets of swings, a slide, and a basketball court. Open from 10am to 9pm everyday but Sunday, when it closed at 6 pm, the site was equipped with floodlights to allow children to play in the evenings.  From 9am-3pm the space was set aside for mothers and preschool children; from 3pm-6pm for younger children; and from 6pm-9pm for older children. In 1932, the CAS described the site as having two playgrounds, one for girls and mothers facing 133rd street and one for boys facing 134th Street. A staff of four supervisors worked in the playground; two women worked with girls, two men with the boys.  In 1930, 500-1000 children a day reportedly used the playground (7).

The summer school break added school-aged children to those looking for places to play. In 1920 the city closed particular blocks of streets to create playgrounds: West 131st Street from Lenox to 7th Avenues and West 140th Street from Lenox to 7th Avenue were both turned into playgrounds from July 6 to September 11 (8). Later in the 1920s, the city opened school playgrounds in the summer as vacation playgrounds. Staffed by city employees, usually public school teachers, vacation playgrounds offered physical training, baths, music, and special entertainments, as well as excursions around the city. In 1925, the Vacation Playground at P.S. 139, for example, had a staff of three men and four women. Three baseball games, two basketball games, a stickball game and ten handball games took place at one time in its large yard. In addition, the staff operated a kindergarten for little ones, a game-room, a playground library and a glee club, and each day at 3.45 pm served cold milk for the cost of 25c (9). Harlem’s leaders fought to expand the number of vacation playgrounds in the neighborhood: in 1920, only one operated in Harlem, at P.S. 5; by 1930, six of the eight schools with black pupils had vacation playgrounds, catering to several thousand children each week (10).

Community groups also operated vacation programs at their playgrounds. For example, beginning in 1928, Utopia House offered a program for 200 children that ran from 10am to 6pm in June, July, and August, providing a playground, classes, ping pong, pool and “carom” tournaments, as well as a basketball team, and an excursion every two weeks, to places such Throgg’s Neck and Coney Island, and Yankee Stadium (11).

Playgrounds in the 1920s featured professional supervision. Historians have debated the impact of these supervisors on children and their play. Research focused on the playground movement’s promotional literature led to arguments that supervision operated as a means of social control and Americanization, to shape the values and attitudes of working-class immigrants and migrants into the workers required by industrialists. Other historians have highlighted the limits to playground supervision; its concern with providing safety and security for children necessary for parents to allow them to use the space, including watching out for injuries, preventing equipment being stolen and stopping older children dominating the space. They have also highlighted that participation in supervised activities was not compulsory (12). Newspaper reporting of playgrounds and vacation playgrounds in Harlem tended to emphasize that supervision kept children safe from the dangers of the neighborhood’s traffic and helped them learn to follow the rules of the games they played (13) The experience of supervision in Harlem would also have been shaped by the race of the supervisors. Unlike Harlem’s schools, many were African American, as was the case with J. Louise Ford, the first director of the CAS playground, and her assistant in the girls work, Hortense Sanders (14).

The photograph of the CAS playground above offers evidence that supervised playgrounds offered space for both organized and free play. The image is dominated by two circles of children, each with including an adult supervisor, involved in organized play. Around those circles other children participate in a variety of other unsupervised activities. In the foreground boys play table tennis and pool, and to the left of the circles, shoot basketball in what does not appear to be an organized game. Behind the circles, girls occupy all of the swings. While adults are certainly managing the playground, they do not appear to be completely controlling or dictating what the children do within its bounds.