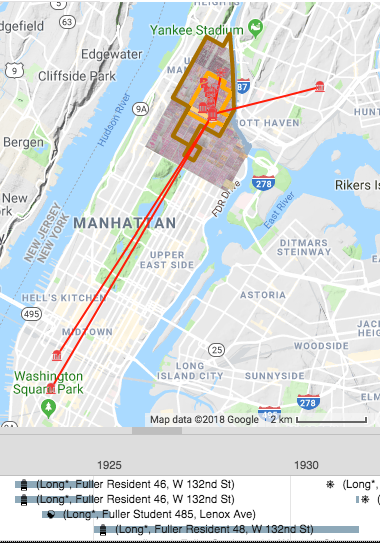 Fuller Long* was a seventeen-year-old African American boy placed on probation in 1928, after having been convicted of having sexual intercourse with his underage girlfriend.  The map shows his life in Harlem.
(* This name is a pseudonym, used at the request of the Municipal Archives)

Together with his parents and two sisters, Long migrated to Harlem from Petersburg, Virginia, in 1923, living for two years at 46 West 132nd St, then in an apartment next door, at 48 West 132nd Street. (The buildings are so close to each other that you need to zoom to the closest level to distinguish them) Such residential stability was true of many families in 1920s Harlem, particularly those with multiple wage-earners (Long’s mother worked as a janitor, and later a housekeeper, and his older sister had a job in a factory; two months after they arrived, Long’s father left the family)

Long stayed in school until the end of ninth grade, when his mother insisted they needed his income to meet expenses and keep his younger sister in school. Schooling kept young blacks in the neighborhood; in the 1920s, Harlem had five public elementary schools and two junior high schools, one for boys, one for girls, a vocational school, and at least two Catholic schools and one private girls school.

When Long left school, he worked first for ice-man based across the street from his home, and then worked outside the district, downtown and in the Bronx. What a New York Times reporter described on March 24, 1935 was also true of the 1920s: “Every morning sees an exodus of workers filling subways, surface cars and elevated trains and every evening sees them returning to their homes (E11).”  Harlem offered few jobs for blacks, with most of the businesses owned and staffed by whites, so Long was one of many residents who spent their working days outside its boundaries.

Long’s time in Harlem was thus spent at home and in leisure, at locations such as the Abyssinian Baptist Church (occasionally), venues where he played sport (gymnasiums where he played basketball (often) and a recreation centre where he swam), dance halls, and at the home of his girlfriend.  Most were within 10 blocks of his home.

It was sports that provided community ties that gave order and stability to Long’s life, and helped keep him from the ‘waywardness’ that reformers expected of the child of a single mother.

Basketball, Long’s particular passion, had a central place in 1920s Harlem.  The neighborhood was home to the Rens, the preeminent black professional team in the 1920s (for which White unsuccessfully tried out in November 1930), and to teams fielded by a variety of different athletic clubs, such as the St Christopher Club (based at St Philip’s Episcopal Church) and the Alpha Physical Culture Club.  Black fraternities regularly played in Harlem, and by the end of the 1920s, an inter-church league was in operation.  Harlem’s schools began competing in the Public School Athletic League in 1910, and by the 1920s repeatedly won championships in basketball. PS 89, where Long played, were city champions from 1928 to 1937, when they lost to PS 139, Harlem’s junior high school.  Girls and women’s teams also competed, included teams of nurses from Harlem Hospital.

The main venue for basketball was the Renaissance Ballroom (2359 7th Ave), but games were also played at the Alhambra Ballroom (2110 7th Ave), the Palace Garden Casino (2395 7th Ave) and the Manhattan Casino, 258 West 155th St, at the YMCA, and in the gymnasiums of Harlem’s churches and schools.

A more detailed account of Fuller Long’s life in Harlem can be found in our article, “This Harlem Life: Black Families and Everyday Life in the 1920s and 1930s,” which appears in the Fall 2010 issue of the Journal of Social History.

(* This name is a pseudonym, used at the request of the Municipal Archives)

(** This name is a pseudonym, as required by the NY State Archives)

2 thoughts on “Fuller Long: A teenager’s life in Harlem”